Norfolk is the perfect destination for a bike holiday and offers miles and miles of fantastic cycling routes but beware in parts its not as flat as you may think! 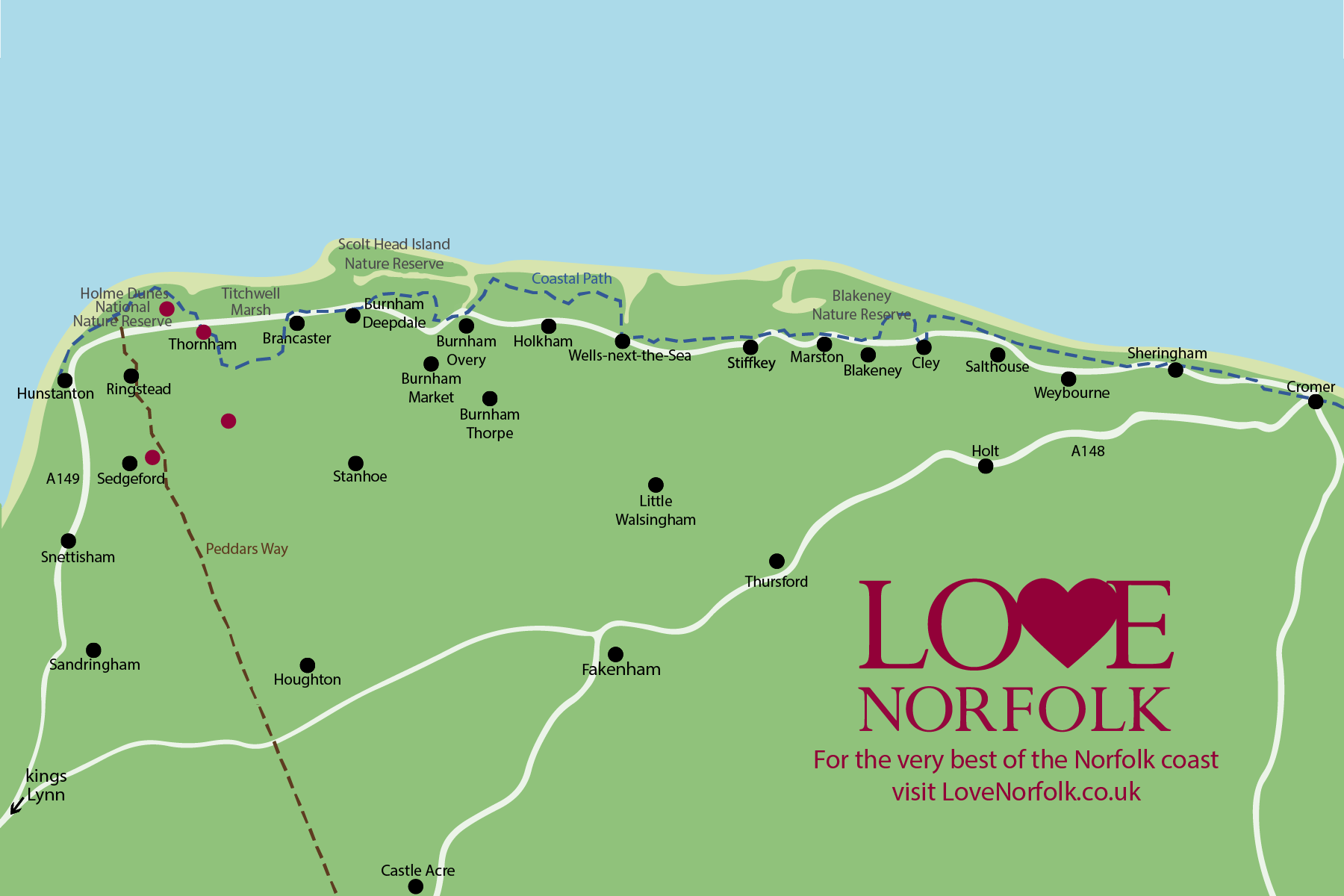 The landscape of north Norfolk seems made for bikes. It’s not hilly and easily managed even by occasional cyclists. Yet it rolls enough to be interesting, and from the saddle you can go at your own speed and savour the distinctive character of the area – its flint walls, red tiled roofs, birdlife, majestic medieval churches, cosy pubs, grand country estates and wonderful tranquility. And you’re nearly always aware that the sea is not that far away.

Magazine Wood is perfectly appointed for a great Cycling holiday. located on Peddars Way and you are permitted to cycle nearly all 93 miles of it! Turn left out of the drive and you can cycle right to the sea and explore this wonderful coastline turn right and a more rural route with some unmade tracks (that can be muddy) will take you past beautiful woodlands and historic estates.

Sandringham Much of the estate of the Queen’s Norfolk residence is designated as Sandringham Country Park, open free all year, an area of 250 hectares of carefully managed woodland and heath. It has two nature trails and is about 15 minutes drive or 40 minutes cycle from us.

The Norfolk Coast Cycleway is a series of signposted routes make it sheer pleasure crossing through delectable Norfolk countryside. The Norfolk Coast Cycleway itself, a single 92mile route parallel to the coast, and ten Explorer Loops which are circular tours you can do within a day. The Explorer Loops link with or partly follow the Cycleway. There are several Explorer loops close to Magazine Wood which include:

‘Fine views dominate along this route which travels pretty, winding lanes for much of its length. If you’re feeling energetic try outpacing the deer as you ride the boundaries of Houghton Hall park!  An easy and delightful ride.’

‘It’s a touch of royalty for much of this route, and it shows in well kept roadsides, pretty cottages, and delightful wooded areas. And you can truly get away from the traffic as the route has some well surfaced off-road sections.’

A permissive bridleway leading west from the village explores Ringstead Down Nature Reserve (Norfolk Wildlife Trust) an 9 hecatre area of chalk grassland – the largest area of unimproved grassland in Norfolk. Here you can enjoy a drink and a meal at the Gin Trap. At Ringstead the route also crosses the Peddars Way (part of the Peddars Way and Norfolk Coast Path National Trail);

‘A true ‘get away from it all’ route that explores deep into the Norfolk countryside. There’s little to disturb the peace of this ride, apart from the dramatic appearance of Houghton Hall and its bounding white deer, and an unexpected discovery of German war graves. Fairly gentle ride but challenging undulations in parts.

The attractive old village of Burnham Market spreads around a large central green and has a pub and several stores. Beyond here, the route skirts the south side of Holkham Park, and there’s an optional diversion into Wells-next-the-Sea, an appealing little port overlooking the marshes – which has plenty of places to stay, including the Crown Hotel (also excellent for a meal or just a drink). Just east of Burnham Market, Burnham Thorpe is the birthplace of Horatio Nelson. South of Burnham Thorpe an optional diversion is past North Creake and South Creake (‘the Creakes’), each with its fine medieval church; North Creake has a coffee shop and remains of an Augustinian abbey. Little Walsingham is a charming old medieval village with an extraordinary shrine built to replicate the Virgin
Mary’s home in Nazareth.

Guests at Magazine Wood which is directly on the Peddars Way between the coast and Sandringham can securely store bikes overnight.

Subscribe to our newsletter to be kept up-to-date with our latest offers.

Arranging a gift voucher is really simple and delivered in minutes. Just drop us a line with the name of your recipients, the gift amount and a convenient time to call to take a card payment and we will immediately forward a personalised voucher by email.

The only place to immediately check our actual availability and book online at the best rates and with our privileges benefits.

We accept most major credit and debit cards.